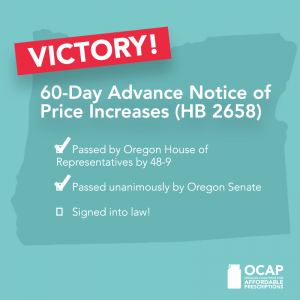 Oregon Coalition for Affordable Prescriptions (OCAP) is thrilled to announce the unanimous passage of House Bill 2658-B by the Oregon Senate. The bill to reduce prescription drug prices was approved by a unanimous, bipartisan vote of 25-0 (4 excused) and now goes to back to the House floor for a concurrence vote before heading to Governor Kate Brown’s desk for signature.

HB 2658-B requires pharmaceutical manufacturers to give at least 60-day notice before raising the prices of certain prescription drugs. Dozens of Oregonians affected by high drug prices testified in support of the bill, in addition to the thousands who made phone calls and sent emails to their lawmakers.

“We’re excited to see the Legislature taking action to hold the pharmaceutical industry accountable for price-gouging that has been devastating Oregon families,” said Numi Lee Griffith, OCAP President. “Similar legislation in other states has created enough public pressure to stop scheduled increases. The bill also ensures that those who rely on prescription medications for life-threatening conditions have time to find an alternative with their health care provider.”

OCAP is now focused on passage of a second bill, House Bill 2689-A, which would allow Oregon to import lower-cost, same-quality prescriptions from Canada. This bill was approved by the Health Care Committee and awaits a vote in the Joint Ways & Means Committee.

“Both pieces of legislation are necessary to provide the relief Oregonians need from the prices set by drug companies,” Griffith said. “So many people are cutting pills in half, rationing their insulin, and skipping doses because they’re choosing between paying for rent or medication. Together, these bills will make a real difference for people who are struggling to get by.”

Oregon Coalition for Affordable Prescriptions (OCAP) is a coalition representing over 20 organizations, including consumer advocates, health care providers and plans, and unions. Learn more at affordablerxnow.org.